Action and martial arts sensation Alain Moussi is taking a break from his Kickboxer franchise to star in  a new sci-fi martial arts epic titled Jiu Jitsu which sees the action powerhouse teaming up with the likes of Nicolas Cage (Con Air, Ghost Rider). The awesome sounding flick stars Moussi as one of a group of elite fighters who must wage deadly combat every six years against a lethal enemy race with the fate of Earth hanging in the balance.

Now, official word has come down courtesy of Screen Daily that Moussi and Cage will be in very good company as the production has just aded the tope tier talents of Frank Grillo (Beyond Skyline), Tony Jaa (Ong Bak, Triple Threat), and JuJu Chan (Savage Dog, The Invincible Dragon) to the mix! 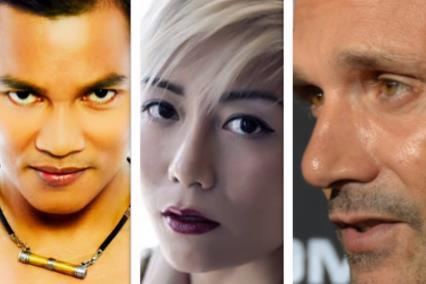 Official Synopsis Per Deadline: Every six years, an ancient order of expert Jiu Jitsu fighters faces a vicious alien in a battle to protect Earth. For thousands of years, the fighters that protect Earth have played by the rules…until now. When celebrated war hero Jake Barnes (Moussi) is defeated by Brax, the Alien invader, the future of humanity hangs in the balance. Injured and suffering from amnesia, Jake is rescued by Wylie (Cage), Keung (Jaa), Harrigan (Grillo) and his team of fellow Jiu Jitsu fighters. They must help Jake to regain his strength in order to band together and defeat Brax in an epic battle that will once again determine the fate of mankind.

Deadline is also adding that Rick Yune (The Fast And the Furious) and Marie Avgeropoulos has been added to the cast as well.

Filming for Jiu Jitsu is expected to start this month on June 24th with Highland Film Group representing all international rights for the sales of the film. Dimitri Logothetis, who helmed Kickboxer: Retaliation and the upcoming Kickboxer: Armageddon, will be directing this film as well from a script that he co-penned with  Jim McGrath which is based on a comic book of the same name.

Grillo will also be seen next in Boss Level where he stars with Mel Gibson while Jaa is finishing up Monster Hunter which has him headling along with Resident Evil’s Milla Jovovich. Chan will be seen in the upcoming Invincible Dragon and the vigilante action film Hollow Point.

After filming is complete on this movie, Moussi and Logothetis will then wrap up their Kickboxer trilogy with Armageddon.

Anyway you slice it, Jiu Jitsu is shaping upm to be one hell of an action epic and lets hope that all participants involved will be utelized to the best of their on screen fighting abilities. Stay tuned and keep it locked and loaded right here for more to come on Jiu Jitsu!

EXCLUSIVE! Blood Soaked Action- A Live Chat with Filmmaker Ranjeet S. Marwa of EXILED: THE CHOSEN ONES on The Action Fix Live!! Plus Check Out Our Early Review!

TRAILERS OF THE WEEK!